In June, when it was nearly fifty degrees Celsius in Delhi, I gifted myself a shinrin-yoku in the Sattal forests.

Shinrin yoku is Japanese for forest bathing: a form of ecotherapy involving sensory engagement with sights, sounds, smells, tastes and touch of the forest.

Coined by the Japanese Ministry of Forestry, Agriculture and Fisheries in 1982, this formal articulation of the process of contact with nature spurred an interest in evidence-based documentation of therapeutic effects of being with the forest. Over forty years, several researchers have examined the healing impact of soaking in the forest’s atmosphere. A study based on psychological measurement tool POMS (used to assess mood changes in people as a result of specific interventions) proved the benefits of shinrin yoku. This study, carried out across twenty-four regions in Japan, concluded that forest environments can assuage human psychological tension, depression, anger, fatigue, and confusion, and they can also enhance human psychological vigour. Another study involving 498 Japanese residents suffering from acute and chronic stress reported a significant reduction in feelings of hostility, depression and anxiety as a direct result of time spent in forested environs.

True to what experienced practitioners advise, I did not plan an activity schedule for my stay in the Sattal forest. I did not carry any apparatus for reading, listening, or recording on my long walks. The phone was zipped up securely in an inner flap of my backpack, for use in emergencies only.  Unburdened of books, podcasts, music, and apps to measure my physical activity, I felt, rather sensorised, the forest. I heard the rustle of the wind through the leaves, waxing and waning like waves crashing on seashore, saw the silvery undersides of leaves, sparkling like kalabattu trimmings, tasted the tangy sweetness of burgundy bayberries, smelt the moistness of the lichen covered barks, and I took off my walking shoes on clover-cushioned patches to touch the gentle prickle of the forest floor. 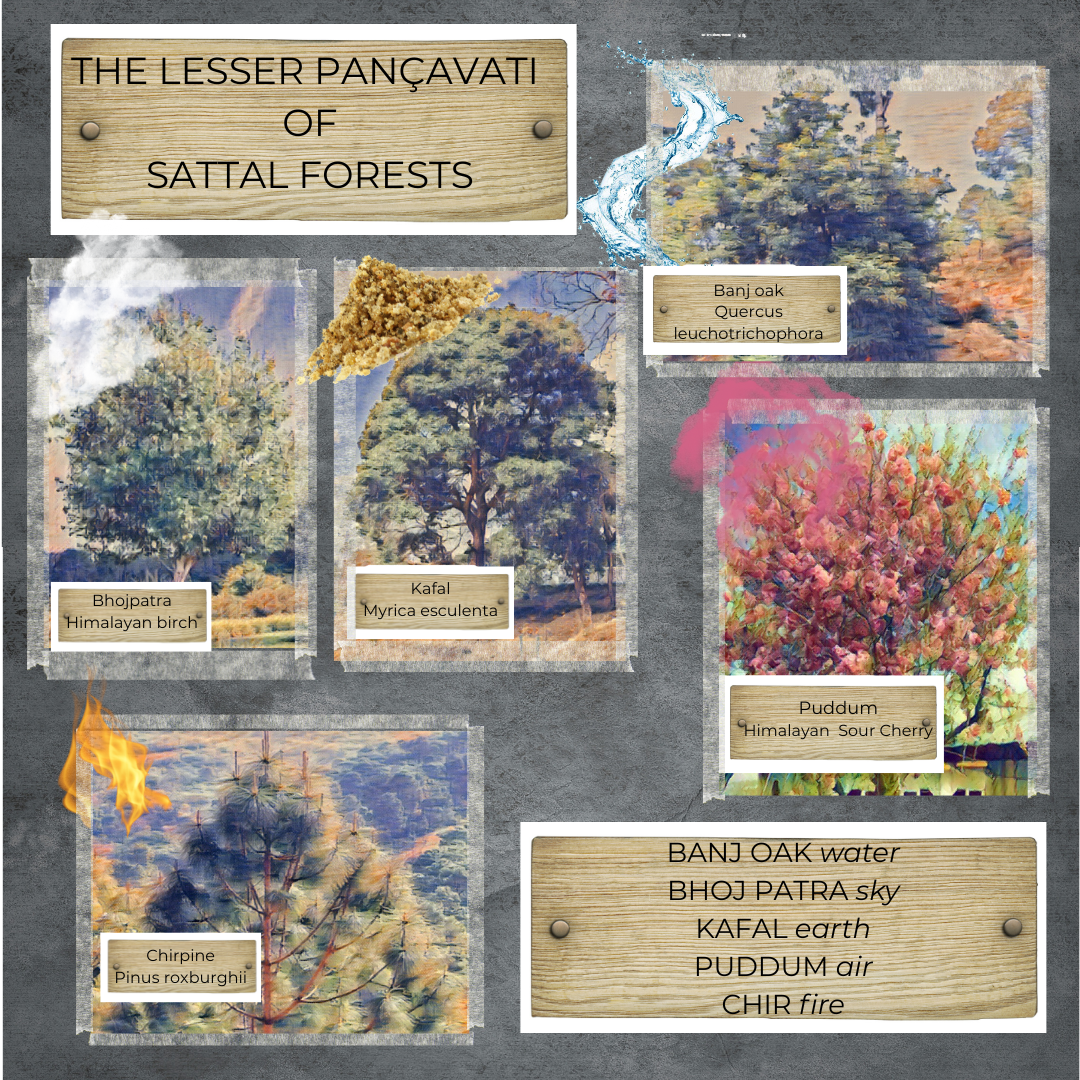 Looking up from one such patch, I noticed an abundance of two trees in the area – chirpine and banj Oak. Following these two, Kafal, puddum, and bhojpatra were also well-represented along the trails. Given that Vedic traditions of forestry already denote the Greater Pançavati comprising peepal, bargad, amla, belpatra, and ashok, I decided to name my assemblage of five as the lesser Pançavati of Sattal.

According to ancient texts, each tree symbolizes one of the five primary elements – earth, fire, water, air, and ether (sky). The elementary properties of each tree in the pançavati are certainly not exclusive domains, nor is exclusion from the pançavati a sign of inferior significance. Just as the Vedic pançavati does not include supremely important trees like neem and mango, the omission of several essential trees like the toona, timil, and thunder found in the Sattal forests, from the lesser pançavati, does not take away from their ecological importance.

Building upon the arboreal-elemental coupling in Vedic traditions, I draw out similar associations for the trees of the lesser Pançavati. The kafal, also known as the bayberry tree and box myrtle symbolizes the earth for the nourishment if offers. The bayberry is eaten by humans, green kafal leaves make excellent fodder, and dried ones serve as effective mulch cover for the soil. The banj oak may be linked to water as it retains up to 40% of the rainwater that it receives. The bhojpatra tree or the Himalayan birch, with its distinctive smooth white bark and unwavering straight trunk, appears to align all its elements to cut through surrounding canopies to reach greater heights, hence it is the most evocative of the sky among the Pançavati. The voluminous blooms of the puddum or the Himalayan sour cherry tree appear to float in space like weightless candyfloss balls, establishing the tree’s affinity with air. The chirpine with its highly inflammable resin makes a natural connection with fire, the fifth pançatatva.

The adversarial relationship between fire and water prominently features in discussing the role of the associated trees–chirpine and banj oak–in forest fires. Many stakeholders, including forestry professionals and village residents, blame the chirpine for exacerbating the fires, whereas others argue against such demonisation of the chirpine. Varsha Singh, a Dehradun based independent journalist resolves this by citing experts who hold that though its inflammable resin makes the chirpine quick to catch fire, it causes less damage to the undergrowth as such chirpine fires are short-lived and does not seep into the undergrowth. In contrast, when the banj oak burns, the moisture in the leaves pushes the fire to the undergrowth, killing insect and animal life that lives on or under the forest floor.

The Sattal forests are home to a natural monument to the friendship between the two trees. On a trail that leads to Alpine Soul Camps in Patunia village, a chirpine and banj oak have inosculated into each other. It is difficult to assess which tree took the initiative, but the intimacy between the trees is apparent in the way the two trunks glide along, embracing each other at several contact points. Inosculating trees are culturally perceived as symbols of love and marriage. Metaphorically, inosculation may be seen as an ideal marriage, wherein the two trees continue to maintain their individual identities despite sharing resources and existing in close togetherness. Inter-species inosculation is less common than same-species inosculation, therefore the union of the pine and oak is an exceptional natural call that is perhaps urging stakeholders to recognize their desire for co-existence. Fire needs water to cool down, as much as water needs fire to animate it.

I began to wonder if the closely touching trunks that held me enthralled was simply a botanical event or was there something more to it. Hindu and Jain traditions hold the sense of touch as the most enduring indicator of vitality. Touch is the last sense to decline and is pervasive in the entire body–from scalp to sole. As human beings age, their hearing, sight, taste, and smell may fail, but the sense of touch lets them distinguish between hot and cold till the very end. Plant roots use the powerful sensory tool of touch to find their way around buried rocks to source nutrition and thigmotropic tendrils use it to find support structures that advance their growth.

Forest bathing in Sattal delivered not just a sense of physical well-being, but also an important spiritual message. The chirpine and banj oak trees were using their only sensory power–touch–to depict powerfully a message of embracing differences and growing together.

International celebrities at home in Darjeeling and Kalimpong

On a recent visit to Kalimpong and Darjeeling, I almost, but not quite yet, met two international celebrities that have settled comfortably in this corner of our country. One, a century-old ginkgo near a former industrial estate in Kalimpong, and the other, a 175-year-old maple on the grounds of a school in Darjeeling. Both have […]

Why You Should Use Seaweed Fertilizers?

A care guide to White Berry

White berry, which is popularly knowns as Snowberry is among the few plants with such a fitting name. It is a deciduous shrub, which means its leaves fall off every autumn. White berry welcomes by embellishing itself with a cluster of pink bell-shaped flowers that is later replaced by a cluster of white berry fruit […]

Everything you need to know about Kaner Plant

Colorful flowers are always a great way to pretty up any garden space. They simply add a warm ambiance to your place. Oleander or Kaner plant is a showy and very adaptive shrub that offers a wide range of colors for your garden. It is also called Nerium Oleander where the term ‘Oleander’ means two […]

If you are looking for a flowering plant that makes a distinctive addition for your garden then the Mogra flower plant is your best bet. Arabian jasmine or Mogra flower plants are evergreen tropical shrubs and vines. This evergreen blooming shrub is among the most loved plants in India. As it adorns itself with gorgeous […]

The Marvellous Beauty of Sontakka Plant!

Flowering plants forever create your garden look additional exciting and will stop neighbors in their tracks to admire their beauty. And when you plant a perennial bloom with gorgeous flowers and aromatic fragrances like Sontakka Plant, they please your mood and surrounding.  The Sontakka flowers have magnificent blooms that give out an intense fragrance when […]